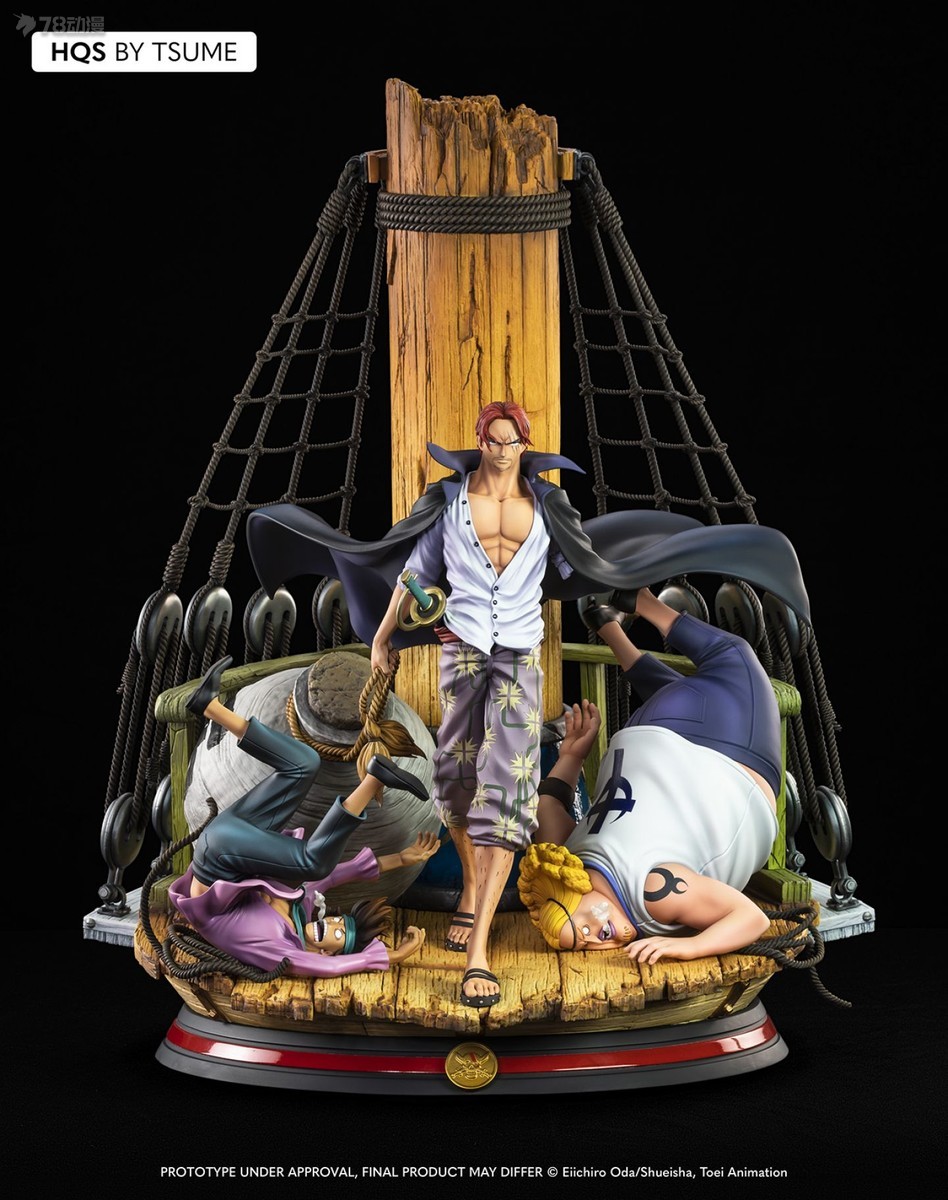 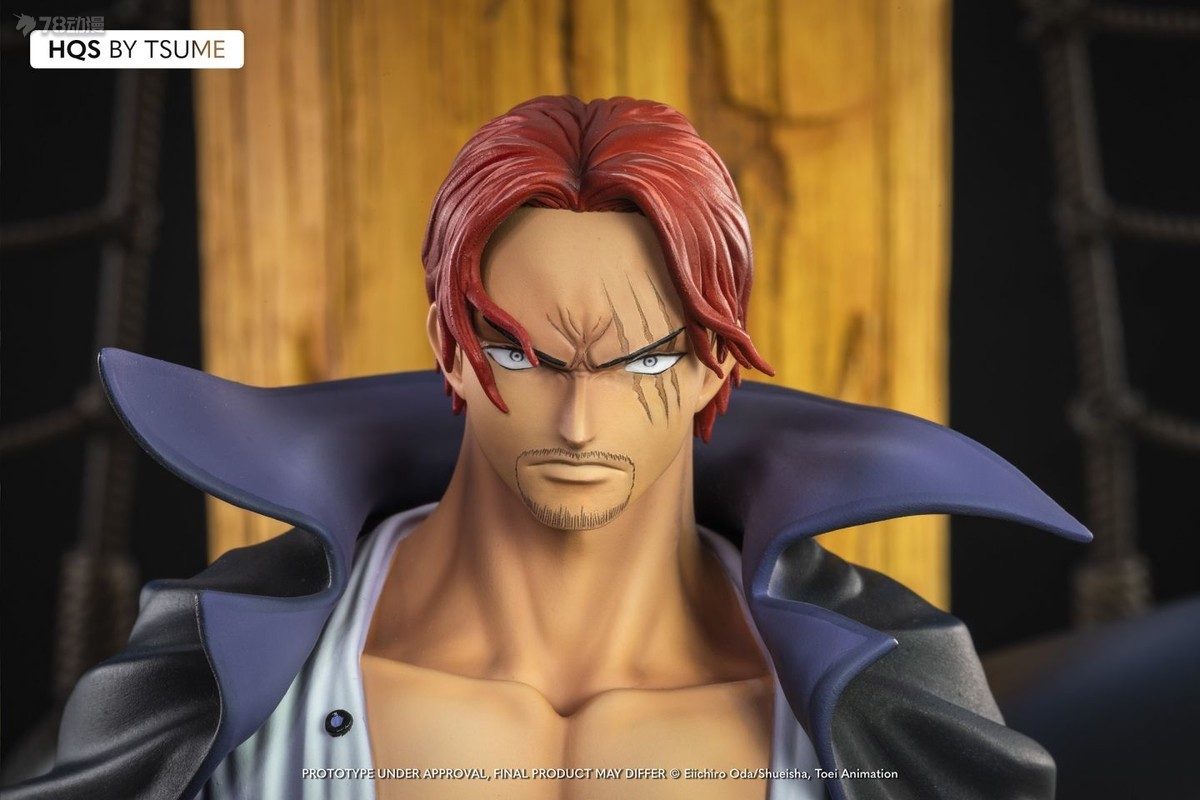 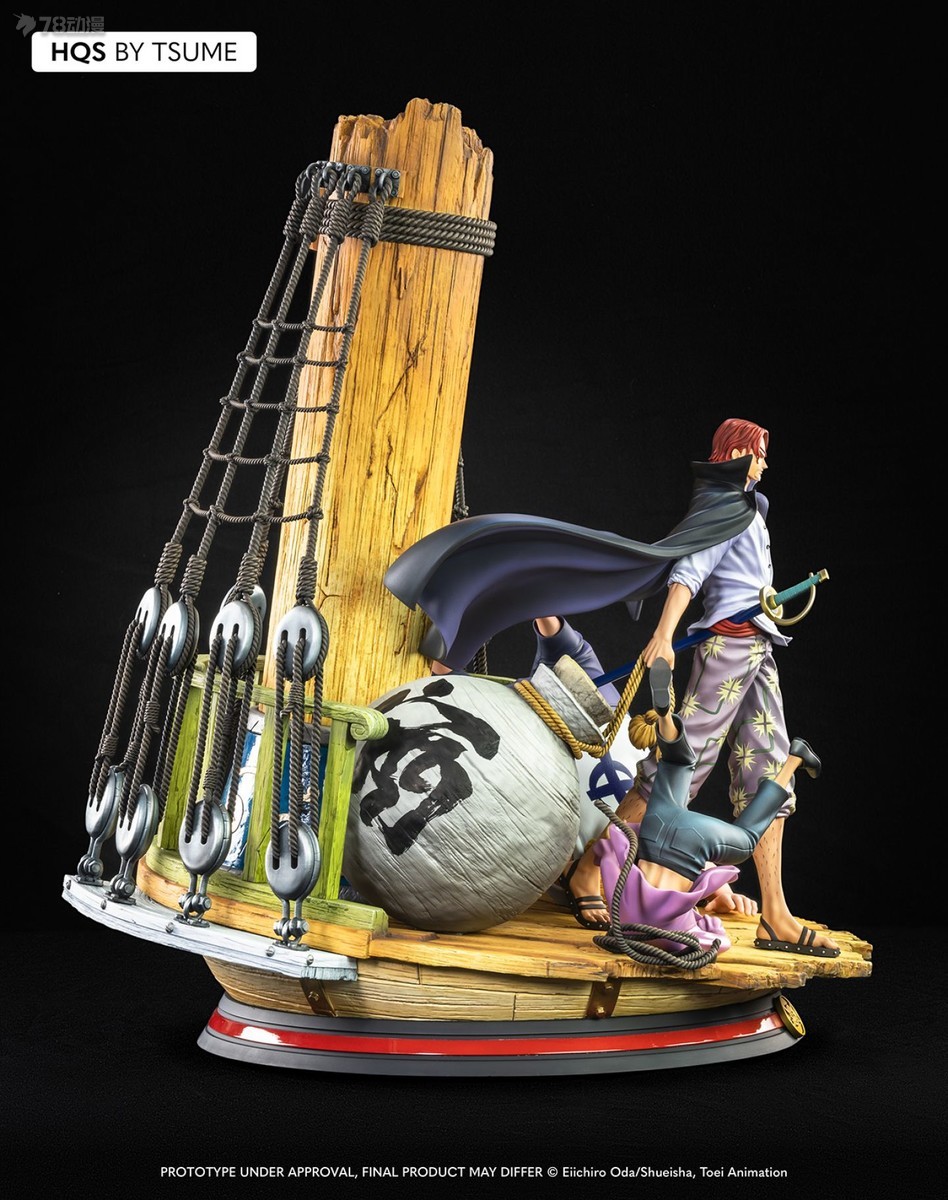 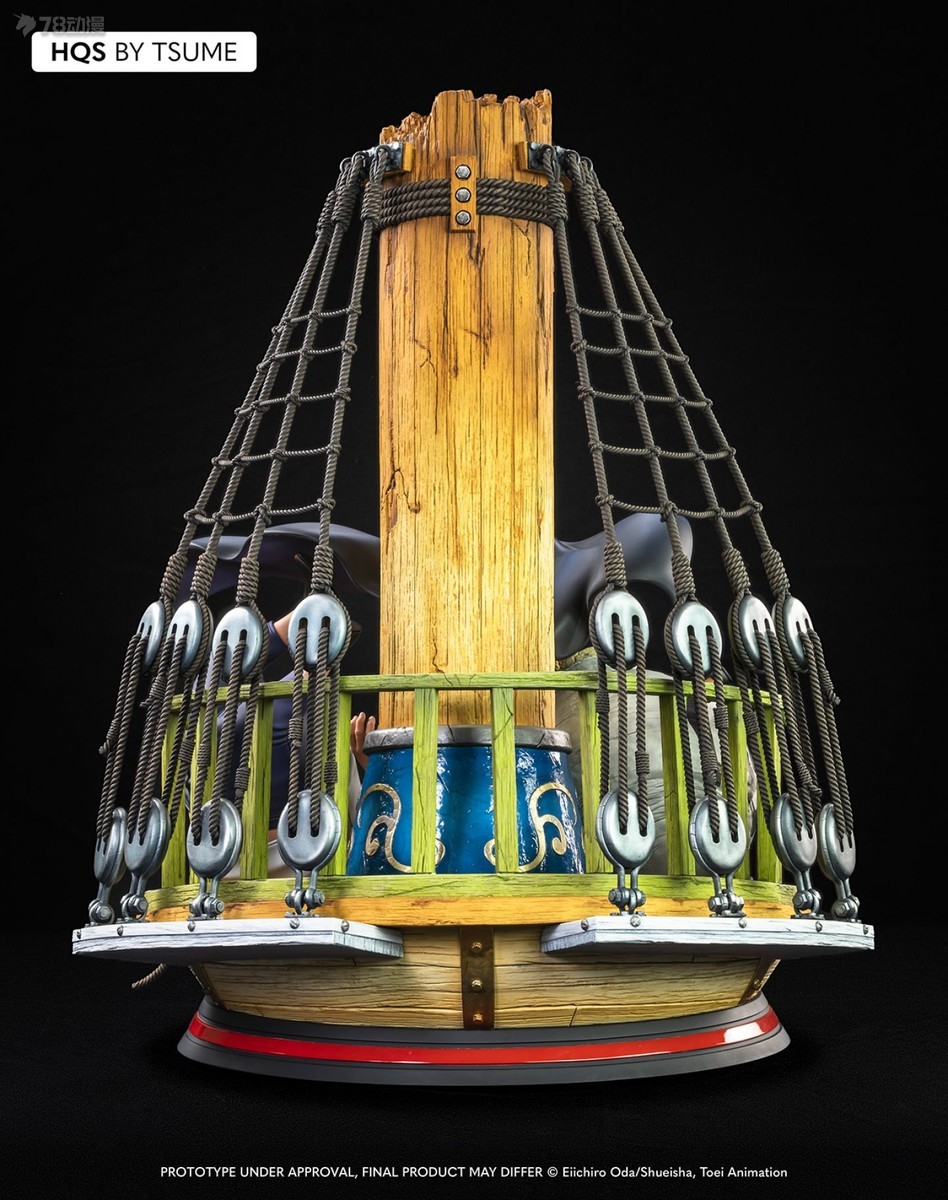 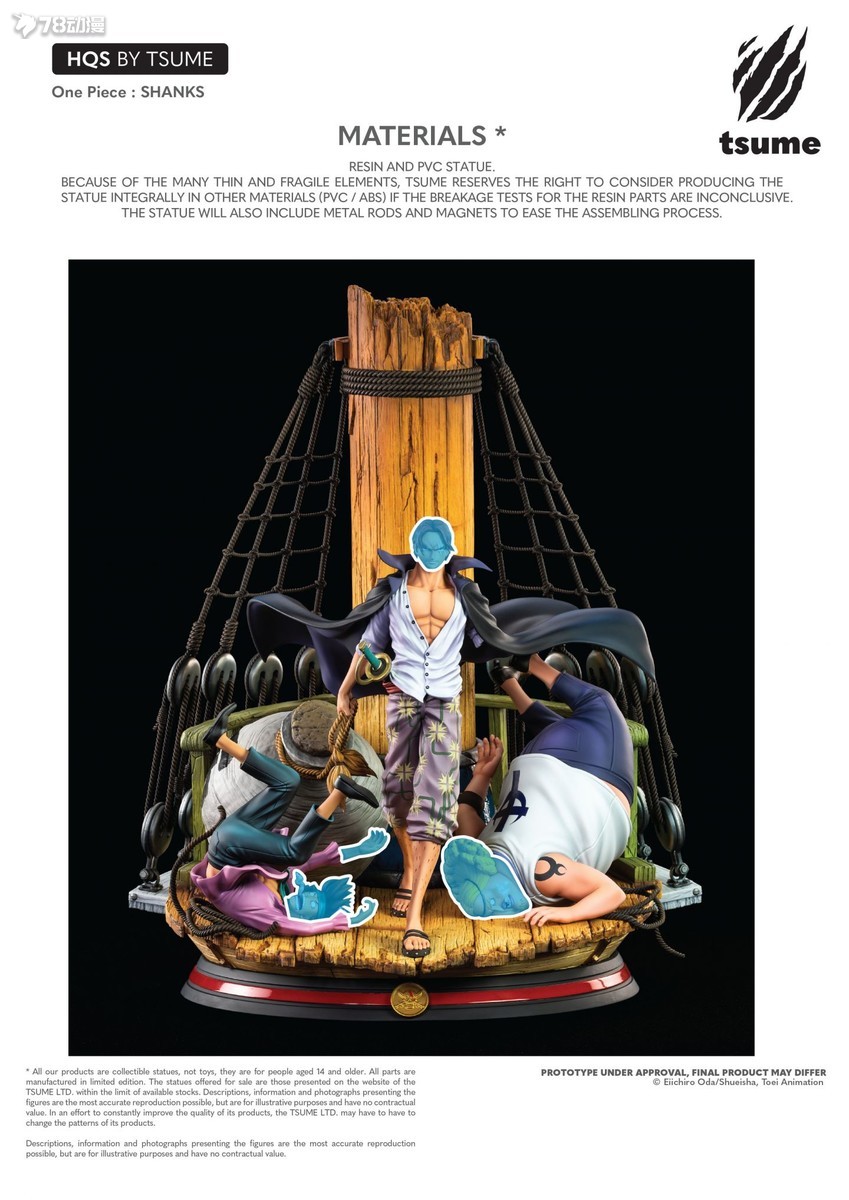 “Excuse me. I had to be a little threat since it’s an ennemy ship”  - Shanks to Whitebeard.
This 1/7 HQS statue of Shanks highlights his incredible power and undeniable presence. After receiving a certain letter, Whitebeard demands that his author come to deliver his message face-to-face, on condition of bringing some good alcohol! We can see Shanks boarding the Moby Dick, advancing in the direction of his famous captain. He drags a huge round jar of Sake on the boat deck, as indicated by the black kanji painted on it, "the best tasting" in his opinion, since it was made at home, in West Blue. Confident, the emperor adopts a royal approach worthy of his power and rank ... Undaunted, his gaze fixed straight on his host, he pays no attention to the crew members who drop like flies after his passage, succumbing one after the other to the irresistible Haoshoku Haki ... The determined expression on his unshaven face, his frowning black brows as well as the three scars on his left eye as a memory of Blackbeard, hint at his great recklessness. His long black cape with midnight blue reflections as well as his red hair with pink reflections are swept by the sea winds. “Red hair” wears his half-buttoned white shirt with pleats accentuated by purplish hues, revealing the top of his muscular torso. The knot reminds us that his left arm was torn by a sea monster while saving Luffy's life. He wears purple capri pants cut below the knee with khaki and pale yellow geometric floral patterns and brown sandals. His long saber with a turquoise and golden handle as well as a varnished midnight blue scabbard is strategically placed: kept on the right side of his waist using his red ribbon, ready for any eventuality ...
While passing out, the two minions of Marco, commander of the First Division of Edward Newgate's Crew, shatter violently on the ground, as shown by the transparent resin foam coming out of their mouths as well as the ropes that fly away. In order to highlight Shanks, the colors of their clothes are in perfect harmony with him. The pirate on his right foot wears a headband, pants and turquoise shoes reminiscent of the handle of his saber, as well as a purple shirt reminiscent of his pants. The pirate on his left foot wears a white tank top reminiscent of the emperor's shirt as well as navy pants and shoes reminiscent of his cape and the scabbard of his saber. We can see a sign of Marco’s crew on his back, as well as a tattoo on his left shoulder, identical to that of one crew member in the anime. Finally, we recognize the legendary Moby Dick thanks to the beige, light brown and white wood, the light green barrier, the ropes but also the refined decorations in gilding and navy blue varnished colors at the mast base. The top of the latter is darker to draw the gaze to Shanks and the wood seems damaged because of the power of the Haoshoku Haki fluid ... Leaning slightly forward, the ship seems to follow the movement of the waves, accompanying the valiant Red-Haired Shanks towards his destiny ...
The statue comes with a numbered plate and a certificate of authenticity. Scale 1/7 Total run of 1,800 pieces. Estimated delivery date from S2 2021*
Trivia
The Moby Dick was coated with special resin from the Sabaody Archipelago, which allows her to submerge all the way to Fish-Man Island at 10,000 meters below sea level.
©Eiichiro Oda/Shueisha, Toei Animation
* : All our products are collectible statues, not toys, they are for people aged 14 and older. All parts are manufactured in limited edition. The statues offered for sale are those presented on the website of the TSUME LTD. within the limit of available stocks. Descriptions, information and photographs presenting the figures are the most accurate reproduction possible, but are for illustrative purposes and have no contractual value. In an effort to constantly improve the quality of its products, the TSUME LTD. may have to have to change the patterns of its products.
CHARACTERISTICS
Artistic direction
Cyril Marchiol, Saesa Kiyokawa, Ivan Kumb
Concept Art
Giorgia Lenzi
3D sculpting
Olivier Sam, Gabriel Lemaire
Technical engineering
José Ku Chio Lu, Jonathan Vigo
Statue preparators
Eric Jolivalt, Guillaume Hemery, Aurélie Nagot
Painters
Eric Jolivalt, Guillaume Hemery , Mickael Gros, Aurélie Nagot
Dimensions
H: 57.2 cm; W: 47.1 cm; D: 48.4 cm
Materials
Resin, PVC