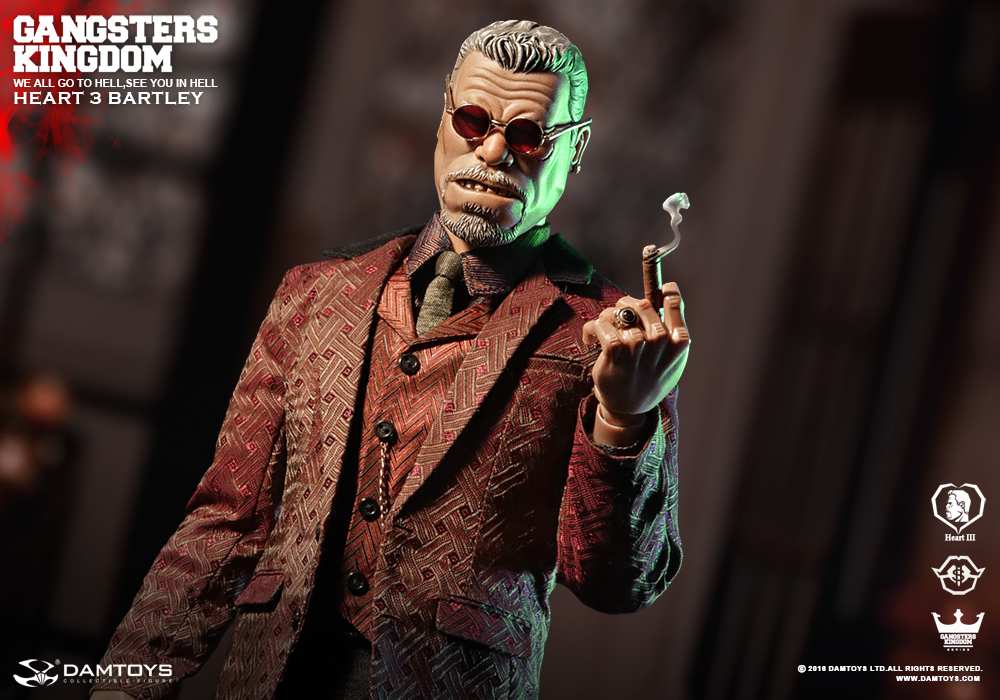 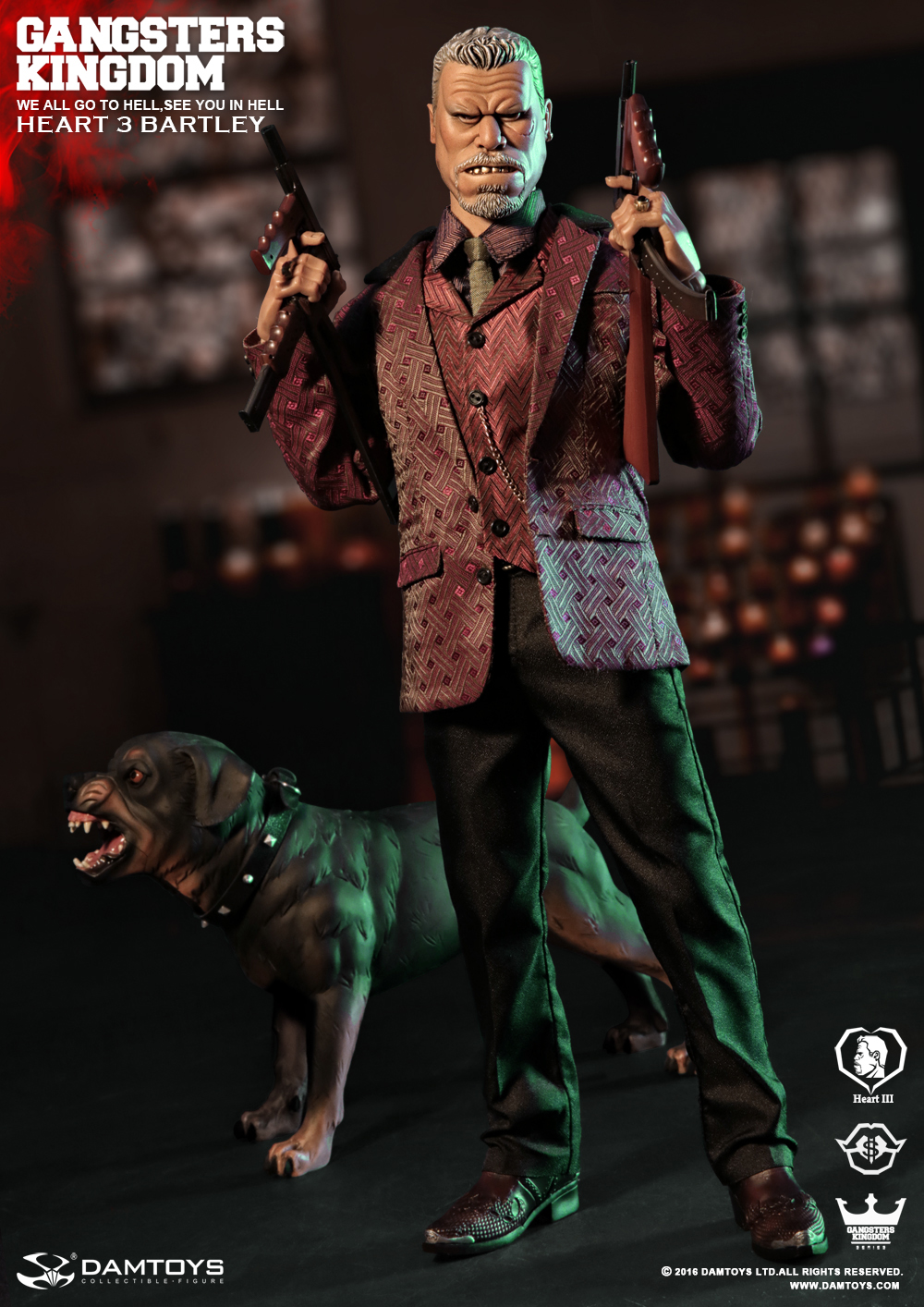 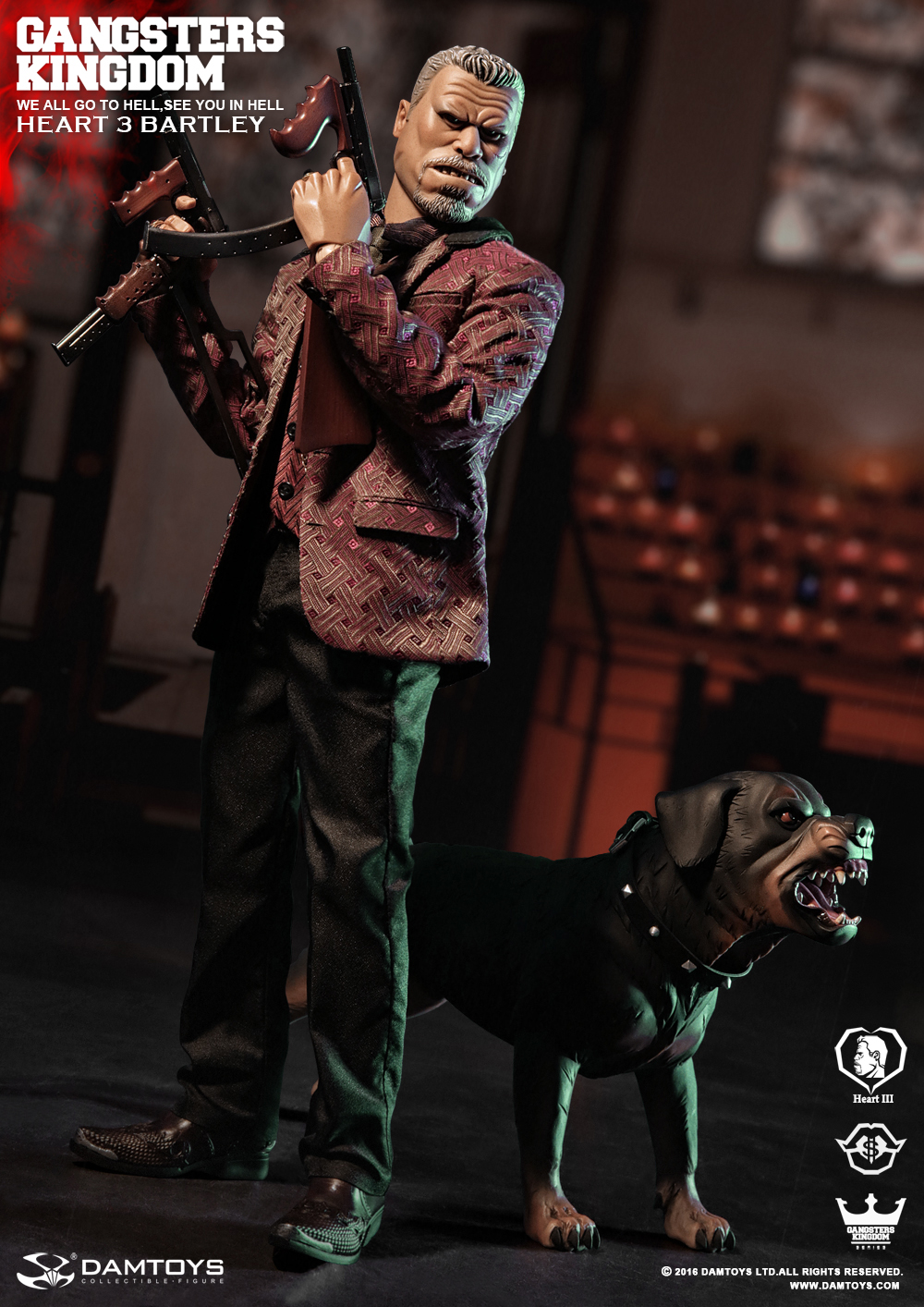 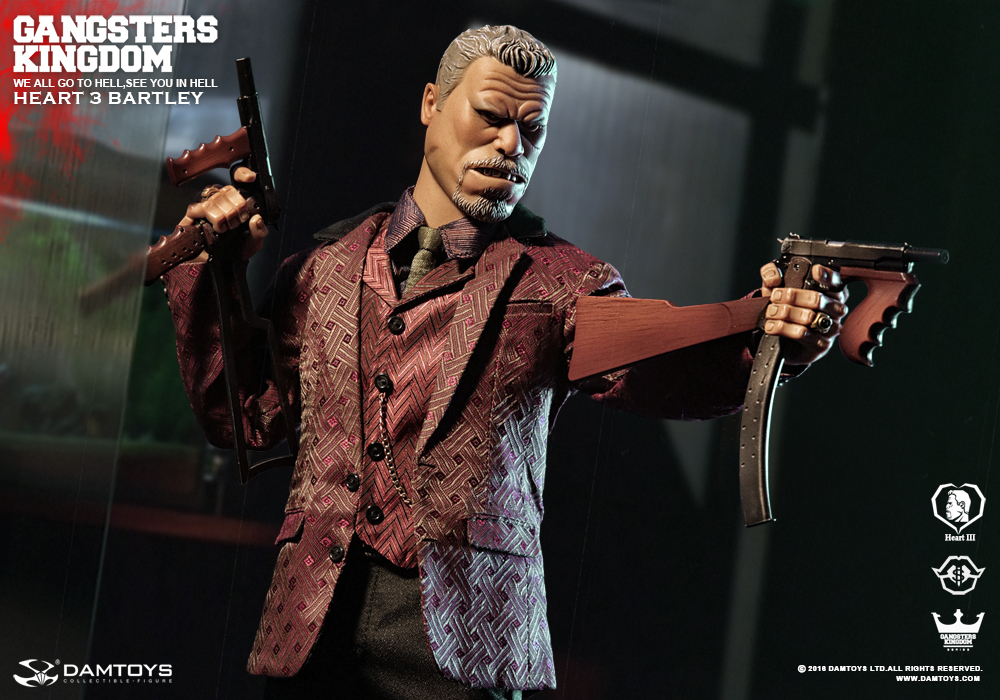 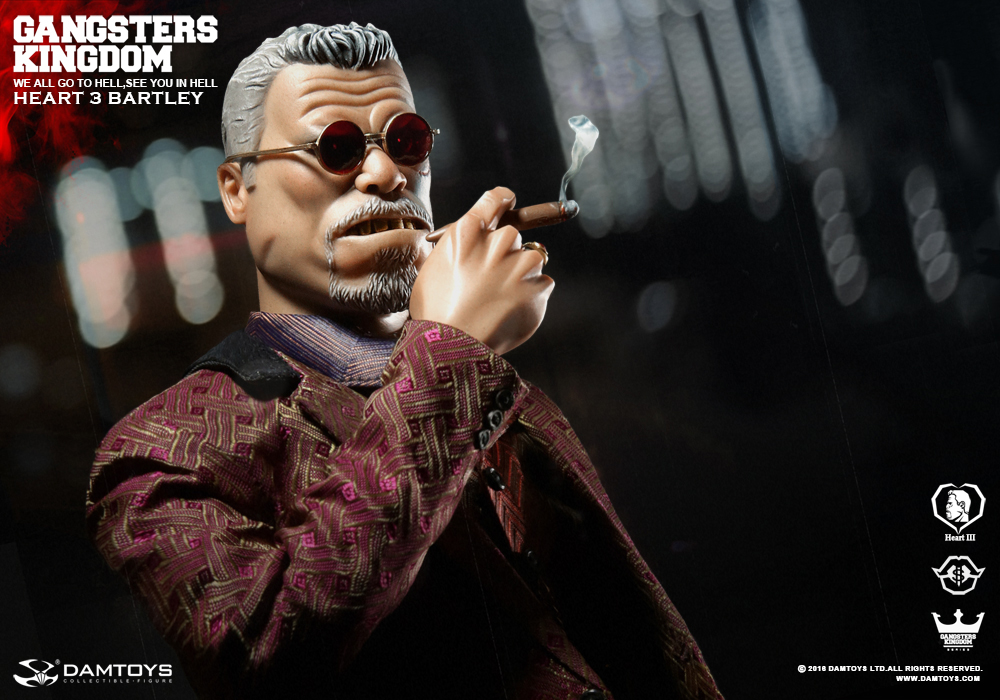 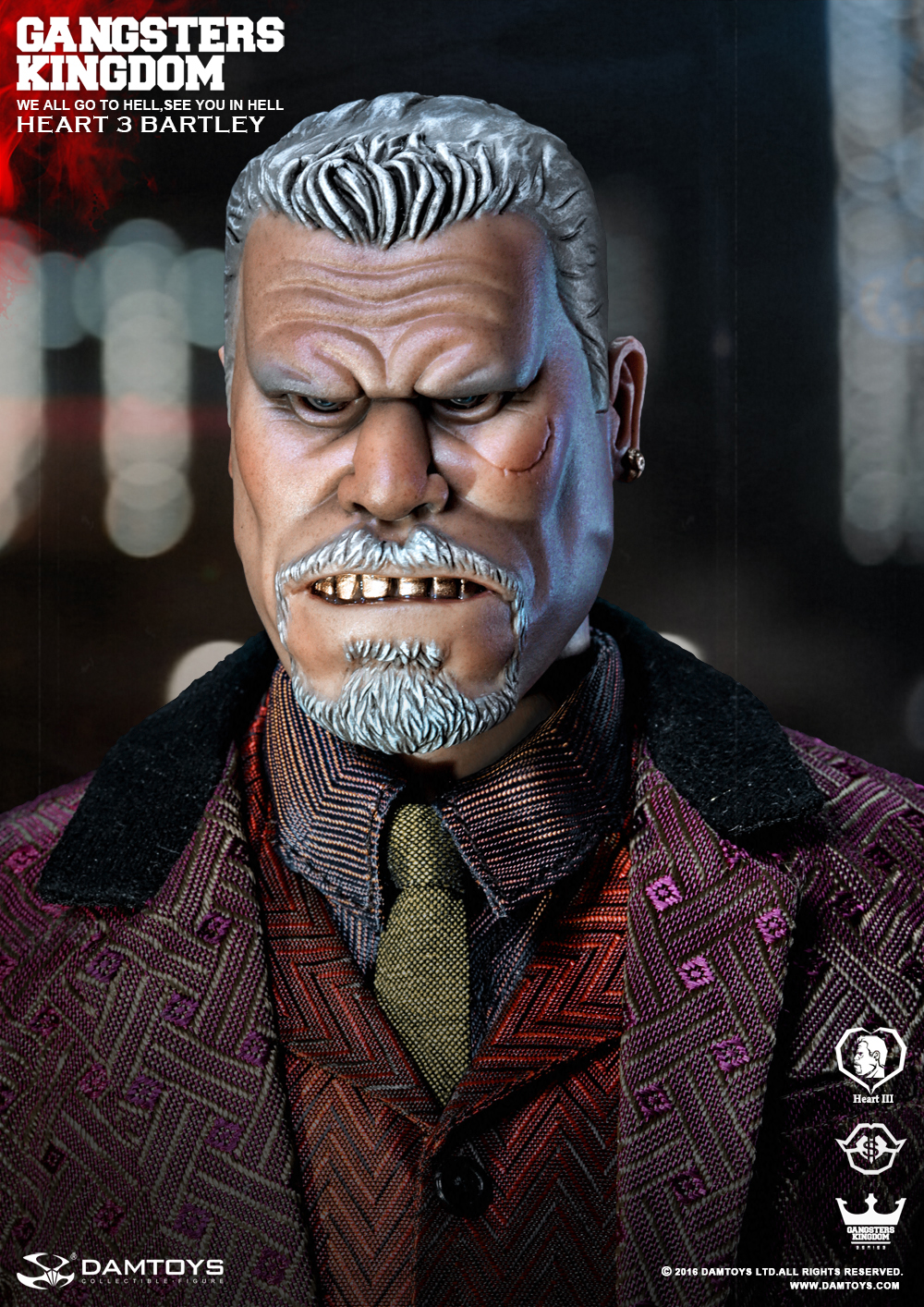 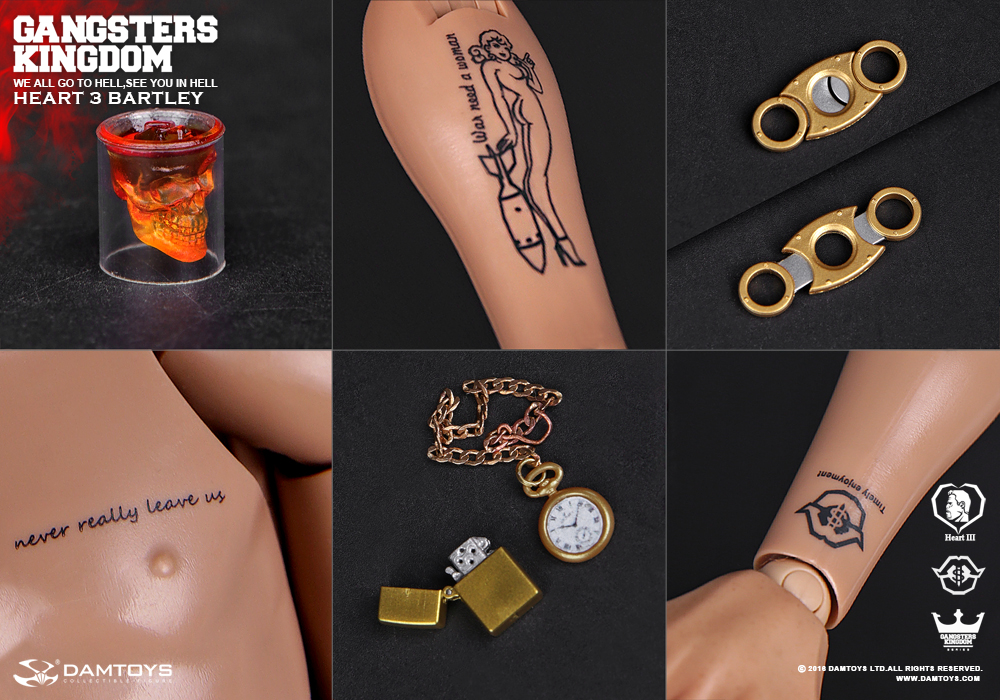 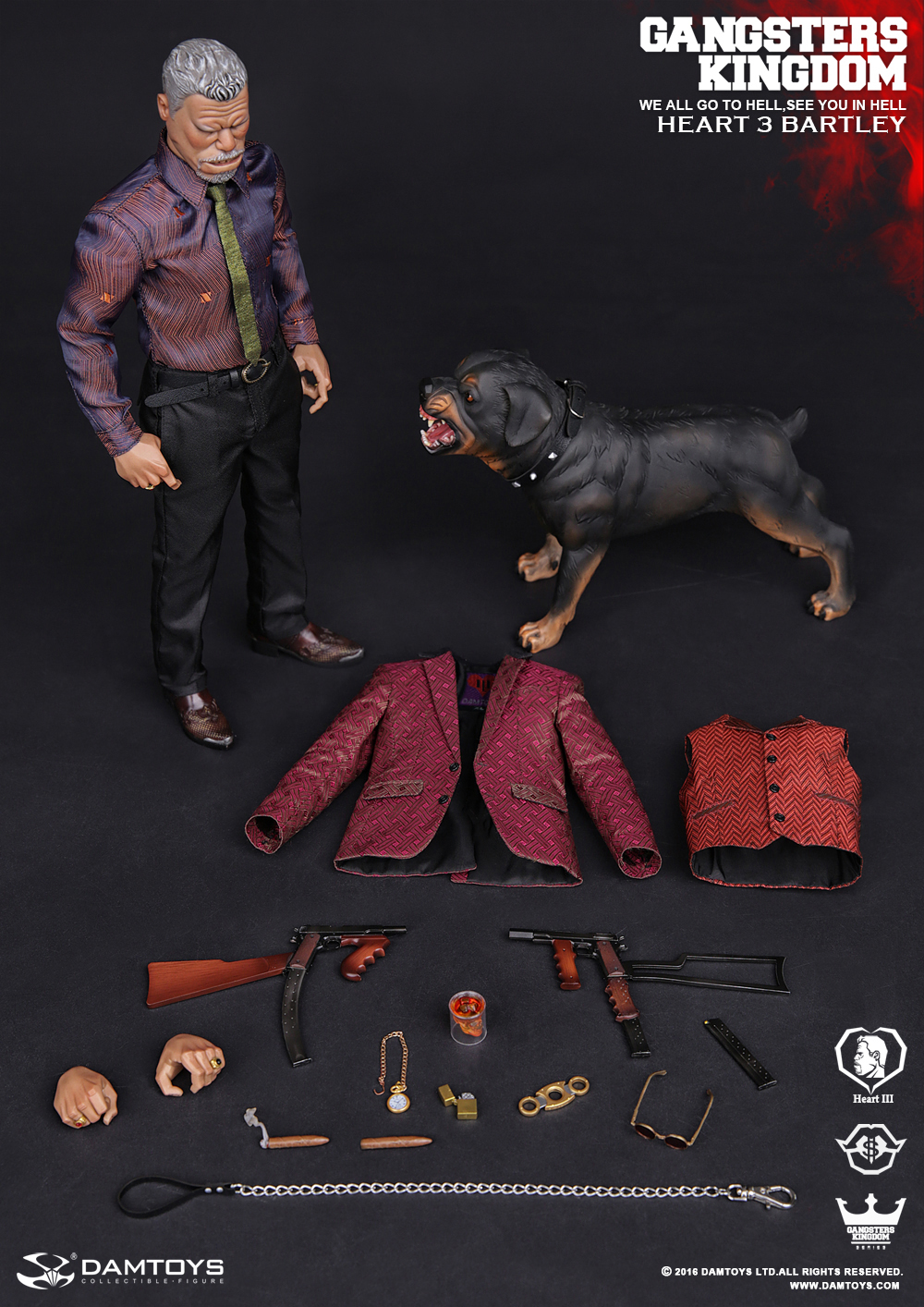 巴特莱右手腕纹身是其俱乐部logo,象征着权力，金钱，情色。“timely enjoyment”及时享乐的价值观也随之相应。
Tattoo on Bartley’s right wrist. It was the logo of his clubs, symbolized power, money and sex. “timely enjoyment” was his motto.

左手臂纹身是巴特莱在军队时所纹，他很喜欢这句话：“战争需要女人”。这也符合他当时拉皮条的身份。
The tattoo on his left arm was put on when he was still in the army.He liked that saying:” War needs a woman.” It fitted his identity as a pimp.

Section 1: The Deterrence Of J

The 3 of Heart - Bartley used to be in the army. He was good at pimping back when he was in the force, introducing all kinds of women to soldiers and low-rank officers. After his discharge, he joined a small road gang. He had a little exotic bar running, which was quite profitable and famous around the locals. That was where he met Billy. With his natural-born eloquence, Bartley talked himself up and earned his chance to work for Billy. Early on Bartley did not stand out, but later, his insight of others and experience as a pimp helped him. The several exotic places that the Heart Family owned were flourished under his watch. He even expanded a few more, opened up two high-end clubs for upper classes. Even though he brought profits and connections for the Heart family, K of Heart never liked his bragging and touting face. Bartley only ranked the 3 of Heart as his ID in the family, which was unsatisfying for him. Yet, Billy’s cynicism did not help Bartley as well.

After Ogier’s arrival, Bartley thought he would be the one to woo. But he was wrong. Ogier had no interest in the sex trade and he did not bought what Bartley sold. Although Ogier did not had much lust for women, but the grudge he hold against Bartley was caused by a woman. Barley almost lost his life during that fight in which Ogier left him a battered face and a mouth full of golden teeth. Bartley resented Ogier yet feared for his status in the family too much to take action.
“So he is back?” Shaking the glass in hand, Bartley walked towards the bookshelf by the wall. It was full of antiques that he had collected. A pair of handmade Lehman m1911 was standing out. They were his favorites. He had given those to Ogier as gift, but he was turned down with just several words - “these can’t kill.”
Barley took out those two guns, admired them in his hand. He said to the man in the room, “He said these can’t kill.”
“He can kill without a gun.” A well-dressed middle-aged man responded with a grin.
“So, what kills ya, Ogier?” Suddenly, Bartely pointed the gun at a huge Rotweiler that was sitting on the ground. The dog roared back at him, as he was trying to answer.
“The 10 of Heart and his niggers won’t stop Ogier this time.” The middle-age man said.
“The golden card can be used only once. Ogier won’t use it in vein. The 10 of Heart will take the opportunity to expand his territory.” Bartley turned to the man and gave him a meaningful look.
“My uncle knew that already. And he had prepared for it. But he is old and has no successor.” That man looked back with a smile on his face.
“Maybe we can get help from Ogier. After all, you are the only nephew of the boss.” Bartley raised his glass for a toast….。
DAMTOYS 1/6 Gangsters Kingdom  - Heart 3 Bartley
DAMTOYS 1/6 黑帮王国---------红桃3 巴特莱
NO:GK014
1.头雕
2.素体
3.加厚内胆
4.紫色衬衣
5.绿色领带
6.红色马甲
7.红金色西装
8.黑色西裤
9.黑色腰带
10.1911冲锋手枪 A款
11.1911冲锋手枪 B款
12.30发弹匣 A款
13.30发弹匣 B款
14.15发弹匣
15.冒烟雪茄
16.雪茄
17.雪茄钳
18.zippo
19.怀表
20.酒杯
21.红色墨镜
22.皮鞋
23.裸手x4只
24.罗威纳犬
25.金属狗链
26.皮项圈
DAMTOYS 1/6 Gangsters Kingdom--------Heart 3 Bartley
NO:GK014
1.Headsculp
2.Action bady
3.filler underwear
4.The purple shirt
5.Green tie
6.Red waistcoat
7.Red gold suit
8.Black trousers
9. black belt
10.1911 machine pistol A
11.1911 machine pistol B
12.30-round magazine A款
13.30-round magazineB款
14.15-round magazine
15.cigar（Smoke effects）
16.cigar
17.Cigar pliers
18.zippo
19.A pocket watch
20.glass
21.Red sunglasses
22.Leather shoes
23.Palm （4）
24.Rottweiler
25.Metal dog chain
26.Leather collar